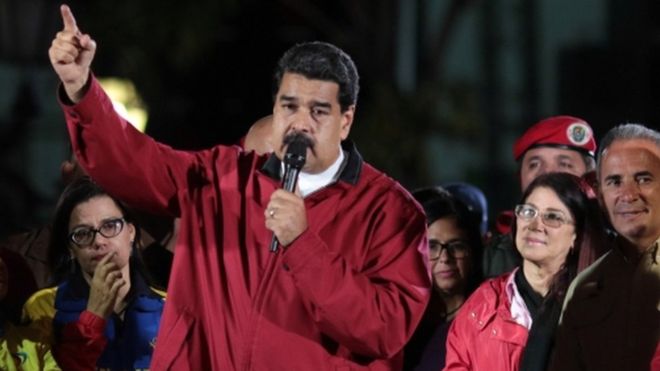 As the nuclear threat with North Korea escalates and tensions continue to boil in the Middle East, the toxic situation in Venezuela struggles to make major headlines. Over the past several months, Venezuela has undergone tremendous inflation, food shortages, protests, alleged fraud in the midst of elections, and violence. The core of the conflict is between the government of Nicolas Maduro, Venezuela’s president, and opposition parties who call for a restoration of democracy as Maduro’s actions and have become increasingly authoritarian. Now,  with the military seeming to be the last line of defense for the Maduro government, the future of Venezuela is up for grabs as a plethora of options is possible.

So, how did we get here?

Venezuela has been marked by its iconic former leader, Hugo Chavez. Chavez was seen as a socialist revolutionary, utilizing revenue from oil prices to spend on social programming and reform. Venezuela, which sits on high oil reserves, spent large amounts of money thus accumulating deficit and debt. Higher prices of oil at the time covered those large expenditures and the Venezuelan economy could sustain the spending. Following Chavez’s death in 2013, Vice President Nicolas Maduro took over the presidency and things started to tumble. Weather patterns and climate change plunged Venezuela into a drought. With so little water to supply the hydropower dam, Venezuelans endured long power outages. In addition, the high oil prices that sustained the Venezuelan economy during the Chavez years had dropped, leading to massive inflation and food shortages. Lastly, the government has stifled opposition by dominating influence in the military and the Supreme Court while arresting opposition leaders. Many in Venezuela have responded with protests that led to a violent response on the part of the government. The violence has been increasing as security and protesters clash. The conflict has since escalated. This past weekend, opposition leaders were arrested and anti-Maduro Venezuelans struck a military base outside of Valencia.

The future for Maduro and Venezuela is very much uncertain with many factors that could play out. Maduro’s grip on the government rests solely with the military and the Supreme Court. The military will be Maduro’s line of defense against increasing opposition as he keeps his high-ranking military officials happy. However, Venezuela is a country whose history is marked by military coups. Successful and failed coups together amount to five in the country’s history following independence in 1811. Therefore, if Maduro slips in his ability to keep military officials happy, the possibility of a military coup is distinctively present. The question remains, would such a coup be successful against the current government? I would argue it would be. As Venezuelan opposition to the government continues to mount, Hannah Strange of The Telegraph UK posted the article, “Is Venezuela on the brink of civil war?”. She cites the increasing unrest in Venezuela, Maduro’s thin margins of victory, former allies turning on him, etc. In the event that the situation erupts into a civil war, this would mandate the government’s army respond. However, Maduro’s own military is seeming to slip away from his influence as Nicholas Casey and Ana Herrero write in an article in the New York Times, “As Maduro’s Venezuela Rips apart, so Does His Military”. Torn between loyalty to Maduro and the anger by the growing opposition, military officials are forced to choose sides. It is very plausible the military will eventually abandon Maduro, now whether that posits a civil war, military coup, re-election, opposition government, remains to be seen. However, the growing dissent against Maduro is certainly concerning to military officials, even ex-military are creating rebel groups against him. In addition, national armed forces have a tendency to be nationalistic and conservative to their country’s values. We see this trend of military nationalism prominent in Pakistan wherein military governments following coups are rooted in conservative practice and Turkey whose military is at times seen as the guardian of secularism against religiously-minded governments. Venezuela, which is originally democratic and whose democratic origins are being promoted by the opposition, will find a common ground with the military as support for Maduro dwindles. If and when the military defers to this democratic sentiment will we see Maduro resign or be ousted. Although, following Maduro’s exit, the route that Venezuela takes is something only the future can tell us.
Image Credit: Reuters & BBC