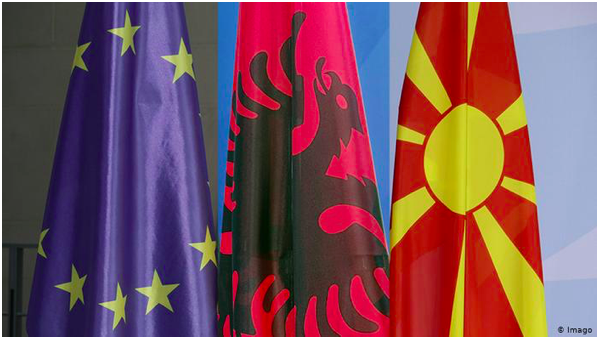 On October 18th, the European dreams of the Western Balkans, became somewhat more distant than before. France, Denmark, and The Netherlands vetoed the opening of EU accession negotiations with regard to Albania and N. Macedonia. The hopes of two people, whom throughout three decades have relentlessly fought against the tides of corruption, crime, and systemic poverty, saw their dreams of definitively joining the European family put into question. The progress made by Tirana and Skopje is far from ideal, but taking under consideration the brutal socio-political conflicts these countries emerged from, it should have been recognized as a token of appreciation and acceptance from the European Union. Regardless, the decision was made to alienate the two once again, which begs the question, was this a mistake or a calculated step? Emmanuel Macron came under fire and severe scrutiny by partner nations questioning his judgement, and debate has ensued in the European bloc concerning reasons and consequences for the veto.

When looking at the cases of Albania and N. Macedonia, the lines between reasons and consequences become somewhat blurred, and must be scrutinized with much more attentiveness and in a broader balkanic context, for the fates of the region are so heavily intertwined it would be catastrophic to deal with each nation in an isolated manner.

Macron’s logic behind the veto is somewhat sound. The French president argues that the European Union is in a crossroads of its own momentarily, and focus needs to be primarily placed on the strengthening of European institutions and the reconjuring of faith among member states first. Furthermore, Macron argued that the enlargement process as it stands is heavily flawed, and provides new member states with on-par powers, opportunities, and benefits, of which the burden will be shouldered by leaders such as France and Germany disproportionately.

Superficially sound logic and valid points. This has been a tumultuous and turbulent decade for the European bloc with an array of shaking events unfolding at the heart of the continent.

The trust and dependability of the Union was severely diminished by the Syrian refugee crisis, which exposed the flaws of an uncoordinated foreign and security policy. It also highlighted that the Union is anything but that, and authority lies with few member nations. A wave of populism overran European politics, catapulting charismatic reactionary, right-wing figures in center stage. Figures such as Viktor Orban, Sebastian Kurz, and parties such as the National Front, and the Brexit movement really shook the foundations of European unity and cooperation. In recent years, Paris and Berlin have led the charge to restore faith in the union and its institutions, and one can see why Macron is hesitant in expanding an already fragile EU, with unstable countries.

Albania and N. Macedonia have made considerable progress and reforms. They have amped up their efforts to fight organized crime, corruption etc. Albania is currently engaged in a judiciary reform orchestrated by the EU, and keeps Brussels in the loop on major law enforcement and political developments. Macedonia went as far as to change its name and settle its dispute with Greece. Yet regardless of such progress, the countries continue to remain volatile and exposed.

The economies of both Tirana and Skopje continue to lag behind the rest of Europe, there is a lack of domestic market frontiers, and not enough government security and regulations to draw in investors. Though it must be mentioned that both countries are making headways in such fields.

Essentially, Macron’s hesitation stands on the concern that the Balkan countries will lag behind, be burdensome, and further destabilize the Union, which is in an already unstable state. The continent after all, continues to suffer from the likes of Balkanic members such as Bulgaria, Romania and Greece, potentially increasing that list does not resonate with many Europeans.

Though now that Macron’s logic has been explored, it is important to look at the implications of such a decision, and the political consequences and security concerns that are to emerge from it.

Europe must be very cautious when exploring enlargement in the Balkans. The region has been coined as Europe’s hottest flashpoint, nicknamed the Powder Keg of Europe. The region has not seen conflict since the Yugoslav Wars (1993-2001), though tensions continue to remain high. Balkan nations have yet to reach a compromise between their drive for European integration, or the achievement of their nationalist agendas. Some believe that, if conducted incorrectly, European integration could serve as a political weapon in leaverging others to bend to a particular nation’s wishes. The history of the Balkans is heavily intertwined, and countries have yet to make their peace with the past. This turbulent past continues to dominate the political beliefs of many individuals and is used as a tool by governments and politicians to stay in power, and consequently, manifests as interbalkanic tensions. The European Union being used as leverage over the neighbors is a tactic countries like Albania and Macedonia are not foreign to. Greece overplays the EU card in much of the negotiation talks. They insisted on the name change for Macedonia, and similarly threatened vetoes on Albania if it did not take approaches desired by Athens with regard to Greek minority rights. Due to such obstacles, tensions between Tirana, Athens and Skopje are relatively high. Isolating nations in the integration process could produce further headaches for Europe in the future.

As it stands, Serbia is in the negotiation phase of integration, whereas Bosnia, Albania and Kosovo have yet to reach such step. Implications of the Serbian advantage have already erected fears and nationalist sentiments across the above mentioned countries, further delaying their integration could aggravate and further destabilize the region.

A look at recent history indicates that the intentions of Balkanic nations are far from homogenous, and nationalism continues to shape the political arena. The best means for a Balkanic reconciliation would be negotiations on equal terms, under the moderation of the European Umbrella. The key in this scenario is ‘equal terms’. The EU has attempted to settle disputes in the region in the past, but it has neglected removing political pressure from balkan neighbors and this process. Such isolationist approaches to integration divide the Balkans into different nationalist camps, without giving them a proper vision for the future and for reconciliation. Such hostilities in the EU’s own backyard are nothing but obstacles, and Europe must address them if it seeks stability and a powerful international status.

The Balkans lack proper guidance. What makes their situation that much more volatile, is their geographic location between West and Moscow. If they are Europe’s backyard, then they are Russia’s front yard.

In recent history, most Balkan nations have rationally aligned with the principles of the West, yet their shared history with Russia and the Soviet Union cannot be neglected. Where Europe fails to lead, Moscow fills the vacuum.

Following the red light from Brussels, N. Macedonia and Albania were offered incorporation into the EEU (Eurasian Economic Union), a clear move by Moscow to sabotage enlargement plans, fracture the continent and expand its very own sphere of influence. This is one of many approaches Russia has undertaken to draw the Balkans in its gravity pool. The Kremlin maintains a strong intelligence presence in the region, with various extensive networks of operatives, politicians, businessmen and beyond, who directly report to Moscow, and whose intentions have been clearly exposed as sabotage and destabilization. The CIA along partner agencies in the region have rang the alarm bell when it comes to Russian interference in European affairs, the Balkans being center stage. A most recent example comes in the form of an attempted coup against former Prime Minister of Montenegro Milo Djukanovic. In 2016, it was uncovered that Russian operatives penetrated Albanian and Montenegrin security apparatuses, and almost successfully orchestrated an overthrow of the pro-west Djukanovic government. The Russians were able to procure weaponry from Shkodra, and attempted to transport such weaponry to putschists in Podgorica. The operation was intercepted by partner agencies and neutralized, but not without damage and questions raised. Other instances support the fear of Russian discord and interference. Leaked N. Macedonian counterintelligence reports, detailed decade long Russian undertakings in actively destabilizing the country, inciting ethnic unrest etc. with the intention of preventing pro-western alignment.

Beijing has not hesitated to take advantage of the chaos either. With their indentured servitude approach to loans and development, China is succeeding in convincing lower-tier European economies to succumb to its influence. Arguably, this is short sighted economics, but for a political system driven by nepotism and corruption, short-sighted results produce votes. Long term security risks fail to be taken into account by such nations. The most viable antidote, is the hope of integration into a larger market, a hope that has been put in question by recent actions. Bottom line, the clash of civilizations between East and West is manifesting in the Balkans. China and Russia seek to immobilize the outreach and expansion efforts of the west, while also exporting their system and order.

The risks of alienating the most fragile western stronghold, could really tip the power balance in Europe, especially with an already jammed agenda of geopolitical issues ranging from Brexit, to Syria.

Europe should take careful steps in the coming days to ensure that the Balkans remain European, and to assure the people that Europe is their best option. The neglect must be contained and repaired.