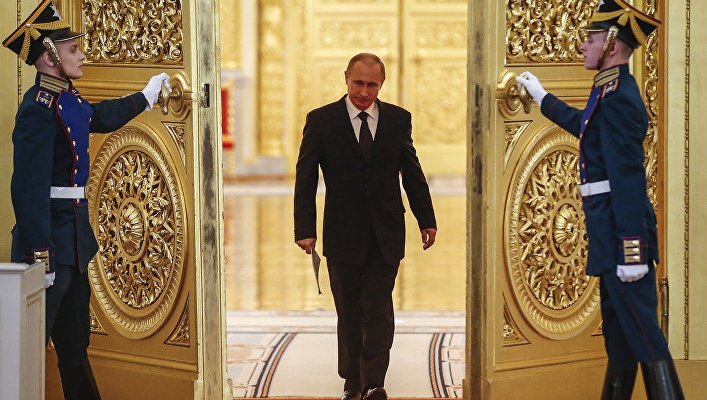 On Sunday, March 18th, the Russian people took to the polls in order to elect their “new” leader. Unsurprisingly, the elections turned out to be very anticlimactic, with Vladimir Putin claiming victory once again, making this his fourth, and second consecutive Presidential term. The former KGB grasped over 70 percent of the votes, blowing away “opposition”, with the closest opponent Pavel Grudinin accumulating only 13 percent of the participating electorate.

This does not come as a surprise to any Political analyst or regular public. Putin has set up a semi-autocratic system, focused on keeping himself, and his party in power. Efforts to silence and eliminate opposition, include political framing, arrests, and even suspicious deaths. The now four term President has put in place a semi-cult of Personality around himself as well, by making use of Russian nationalism, and military might.  He has succeeded in legitimizing his rule by appealing to the Soviet glory days that many Russians reminisce on as a result of economic devastation and national humiliation following the collapse of the USSR. Putin succeeded in catapulting the Russian Federation on top of the Global food chain once again, by destabilizing Ukraine, taking Crimea, South Ossetia, and irritating the West in Syria. Russians see him as a powerful national figure who brought stability, and respect to the country.

Riding on this success, Putin successfully concentrated power around himself, and launched campaigns aimed at eradicating any potential threatening rivals and opponents. He made sure to only propagandize his causes and successes on national television, and allowed no opposition time on state tv. His main political rival Alexei Navalny was denied the chance to run in the 2018 elections, and was later arrested during a January protest. This paved the way for Putin to run virtually unopposed.

The elections terminated though, and the West wakes up to the same old Russia and the same old Kremlin. What does this mean for the west, and specifically the United States?

Putin will not halt his actions and aims of agitating the west, looking to gain political ground, and influence around the globe. This means more provocative policies by the Kremlin in the middle east, and further Russian attempts in stretching their tentacles around fragile European and Asian democracies especially. The Russians are aided by growing waves of populism in Europe, and a retreat of democracy around the world.  Russian intelligence has been very active in influencing politicians and parties all over Europe and more. Recent events which prove increased Russian intelligence activities are the occurrences in The United Kingdom, where a former spy was poisoned. In the Balkan region, the Greek government is forging closer ties to the Kremlin. Allegations have emerged that the Democratic Party of Albania was in contact with Russian businessmen and agents as well. But the Balkans have always been fragile, and have historically been a Russian base of influence, especially fellow Slavic people.

What is surprising is the concerning vulnerability of Western Europe. Far-right and Conservative parties in Austria and Italy, have expressed sympathy towards Putin, and his way of governing. The Austrians expressed that they would exchange delegations, and ideas with Russian counterparts. This proves that Moscow has been busy conducting affairs behind closed doors, and has been trying to revive the former “Soviet Spirit”.

For the United States, this mean (atleast) six more years of carefully dealing with the sharp mind of a former spy, and his ambitions for a Russian Megapower. Putin will try with every mean to undermine the rule of law in the country. Moscow is implementing a divide and conquer plan, in a purist to polarize it, and create political conflict which will divert public attention and institutional attention from global to domestic issues. The United States will need to prove very acute in fighting back this Putinist wave. Americans will also need to put political differences aside, and conduct a united effort to expel Russian interference, and halt their feats. Washington will need to be on high alert, and heavily involved in foreign policy in order to prevent a democracy retreat, and the expansion of Russian influence. America cannot afford to be isolationist, while its main rival plays Big Stick Diplomacy. Washington needs to reassure its allies, and the World, that it is not abandoning its values, and will protect their interest abroad at all costs.